Zombie apocalypse is a genre of fiction in which civilization collapses due to swarms of zombies overwhelming social, law-enforcement, and military structures. Typically, only a few individuals or small bands of survivors are left of the living.

In some tales, parasitic organisms cause zombification by killing their hosts and reanimating their corpses. In this case, zombies also prey on the living and their bite causes an infection that kills.

In either scenario, this causes the outbreak to become an exponentially growing crisis: the spreading "zombie plague" swamps law enforcement organizations, the military and health care services, leading to the panicked collapse of civil society until only isolated pockets of survivors remain. Basic services such as piped water supplies and electrical power shut down, mainstream mass media cease broadcasting, and the national government of affected countries collapses or goes into hiding. The survivors usually begin scavenging for food, weapons and other supplies in a world reduced to a mostly pre-industrial hostile wilderness. There is usually a 'safe zone' where the non-infected can seek refuge and begin a new era.

An early inspirational work of the genre was Richard Matheson's novel I Am Legend (1954), which featured a lone survivor named Robert Neville waging a war against a human population transformed into vampires.[1] The novel has been adapted into several screenplays, including The Last Man on Earth (1964), starring Vincent Price, and The Omega Man (1971), starring Charlton Heston. A 2007 film version also titled I Am Legend starred Will Smith, in a more contemporary setting.[2] George A. Romero began the idea with his apocalyptic feature Night of the Living Dead (1968) from Matheson, but for vampires he substituted shuffling ghouls, identified after its release as zombies.[3]

[4] The narrative of a zombie apocalypse carries strong connections to the turbulent social landscape of the United States in the 1960s when the originator of this genre, the film Night of the Living Dead, was first created.[5][6] Many also feel that zombies allow people to deal with their own anxiety about the end of the world.[7] Kim Paffenroth notes that "more than any other monster, zombies are fully and literally apocalyptic ... they signal the end of the world as we have known it."[8] 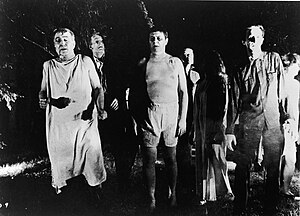 Night of the Living Dead established most of the tropes associated with the genre, including the unintelligent but relentless behavior of zombies.[9]

There are several common themes and tropes that create a zombie apocalypse:

The stories usually follow a single group of survivors, caught up in the sudden rush of the crisis. The narrative generally progresses from the onset of the zombie plague, then initial attempts to seek the aid of authorities, the failure of those authorities, through to the sudden catastrophic collapse of all large-scale organization and the characters' subsequent attempts to survive on their own. Such stories are often squarely focused on the way their characters react to such an extreme catastrophe, and how their personalities are changed by the stress, often acting on more primal motivations (fear, self-preservation) than they would display in normal life.[10][11]

Generally the zombies in these situations are the slow, lumbering and unintelligent kind first made popular in the 1968 film Night of the Living Dead.[9] Motion pictures created within the 2000s, however, have featured zombies that are more agile, vicious, intelligent, and stronger than the traditional zombie.[12] In many cases of "fast" zombies, creators use living humans infected with a pathogen (as in 28 Days Later, Zombieland and Left 4 Dead), instead of re-animated corpses, to avoid the "slow death walk" of Romero's variety of zombies. It is disputable whether cases featuring living humans suffering the effects of a disease should technically be considered zombies, since they have never died.

In addition, ‘special’ zombie types may also be included, depending on the genre, either as unexpected mutations or superior classes compared to standard zombies, boasting special abilities or heightened skills such as strength, speed or ferocity, as seen in video games such as Half-Life 2 and The Last of Us.

While aggressive quarantine may contain the epidemic, or a cure may lead to coexistence of humans and zombies, the most effective way to contain the rise of the undead is to hit hard and hit often.

According to a 2009 Carleton University and University of Ottawa epidemiological analysis, an outbreak of even Living Dead's slow zombies "is likely to lead to the collapse of civilization, unless it is dealt with quickly." Based on their mathematical modelling, the authors concluded that offensive strategies were much more reliable than quarantine strategies, due to various risks that can compromise a quarantine. They also found that discovering a cure would merely leave a few humans alive, since this would do little to slow the infection rate.

It was additionally determined that the most likely long-term outcome of such an outbreak would be the essential extinction of humans with the global human population either succumbing to the epidemic, being killed by existing zombies, or experiencing other fatal events. This conclusion stems from the study's reasoning that the primary epidemiological risk of zombies, besides the difficulties of neutralization, is that their population is subject to near-constant growth: generations of surviving humans would likely maintain a tendency to feed zombie populations, resulting in gross outnumbering and largely continual growth of the infected population, a phenomenon which would only cease with the infection or death of all surviving humans. The researchers explain that their methods of modelling may be applicable to the spread of political views or diseases with dormant infection.[13]

The Zombie Institute for Theoretical Studies (ZITS) is a program through the University of Glasgow. It is headed by Dr. Austin. Dr. Austin is a character that has been created by the university to be the face of ZITS. The ZITS team is dedicated to using real science to explain what could be expected in the event of an actual zombie apocalypse. Much of their research is used to disprove common beliefs about the zombie apocalypse as shown in popular media. They have published one book (Zombie Science 1Z) and give public "spoof" lectures on the subject.[14]

On May 18, 2011, the Centers for Disease Control and Prevention (CDC) published an article, Preparedness 101: Zombie Apocalypse providing tips on preparing to survive a zombie invasion.[15] The article does not claim an outbreak is likely or imminent, but states: "That’s right, I said z-o-m-b-i-e a-p-o-c-a-l-y-p-s-e. You may laugh now, but when it happens you’ll be happy you read this...." The CDC goes on to summarize cultural references to a zombie apocalypse. It uses these to underscore the value of laying in water, food, medical supplies, and other necessities in preparation for any and all potential disasters, be they hurricanes, earthquakes, tornadoes, floods, or hordes of ravenous brain-devouring undead.

The CDC also published a graphic novel, Zombie Pandemic, alongside a series of related articles.[16]

In the unclassified document titled "CONOP 8888," officers from U.S. Strategic Command used a zombie apocalypse scenario as a training template for operations, emergencies and catastrophes, as a tool to teach cadets about the basic concepts of military plans and disaster preparation using its admittedly outlandish premise. [17][18]

On October 17, 2011, The Weather Channel published an article, "How To Weather the Zombie Apocalypse" that included a fictional interview with a Director of Research at the CDD, the "Center for Disease Development".[19] Based on a seasonal attraction in the Atlanta area called The Atlanta Zombie Apocalypse, Weather.com interviews "Dr. Dale Dixon" (subtle references to characters in AMC's "The Walking Dead") asking questions about how different weather conditions affect zombies abilities.[20] Questions answered include "How does the temperature affect zombies' abilities? Do they run faster in warmer temperatures? Do they freeze if it gets too cold?"[19]

Retrieved from "https://macphersonwiki.mywikis.wiki/w/index.php?title=Zombie_apocalypse&oldid=5240"
Categories:
Cookies help us deliver our services. By using our services, you agree to our use of cookies.